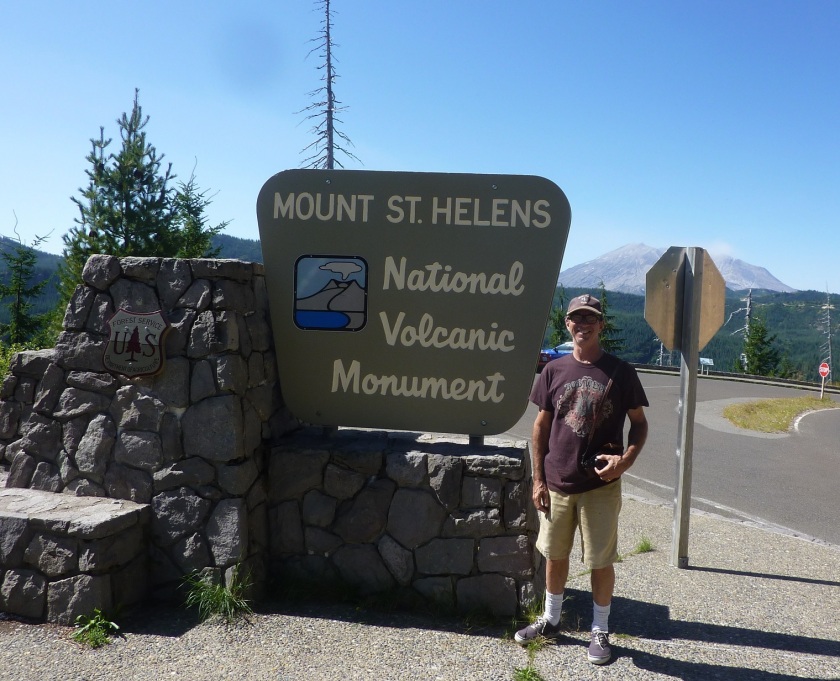 Mt. St. Helens exploded on May 18, 1980 over 39 years ago.  It was the deadliest and most economically devastating eruption in US history.  Fifty-seven people were killed; 250 homes, 47 bridges, 15 miles of railway and 185 miles of highway were destroyed.  Luckily there had been a large earthquake a couple of months earlier in March so they were keeping a close eye on the volcano and expecting an eruption in the near future.  In the days prior to the eruption the northern side of the cone began to bulge up to five feet per day.

The eruption seemed imminent, but was much different than predicted.  A second earthquake triggered a massive landslide on the north face of the mountain moving over a half cubic mile of debris which allowed the volcanic cone to explode the northern side of the mountain.  In the end the mountain was 1300 feet shorter and instead of having a symmetric cone shape it was a horseshoe shaped creator.  So although it was very fast there was a chain reaction, earthquake caused the landslide, the landslide released the volcanic ash and debris which then melted the snow and glacier pack sending tons of slurry mud, trees and other debris racing down the valley.  The volcano continued to erupt for most of the day spewing ash and rock for many miles around. 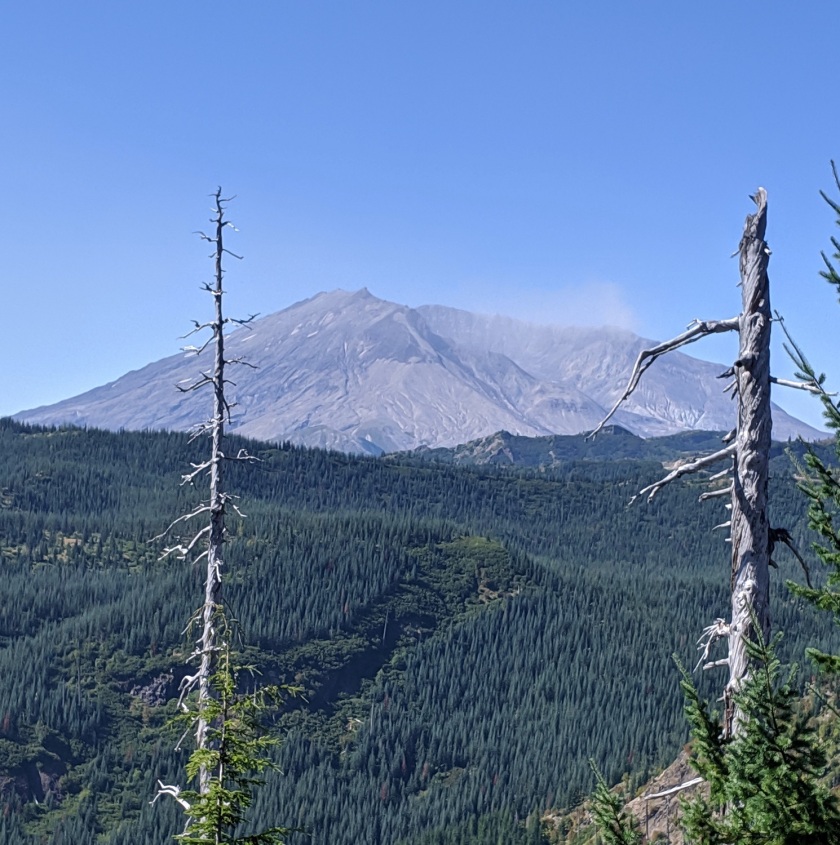 The effect on the surrounding forests was complete destruction.  What wasn’t pushed aside by the landslide was vaporized, burnt or simply blown down by the blast moving at over 300 mph.  As an example of the power of the blast, Spirit Lake to the north of the mountain was blasted up to 850 feet up the neighboring hill side and as the waves retreated it took the forest with it.  The lake rose over 200 feet due to the debris that settled in the lake and was covered with floating trees.  Now 39 years later a large part of the lake is still covered with dead trees trunks.  The greyish area are trees floating on the lake.  We hear they move from side to side depending on the wind… 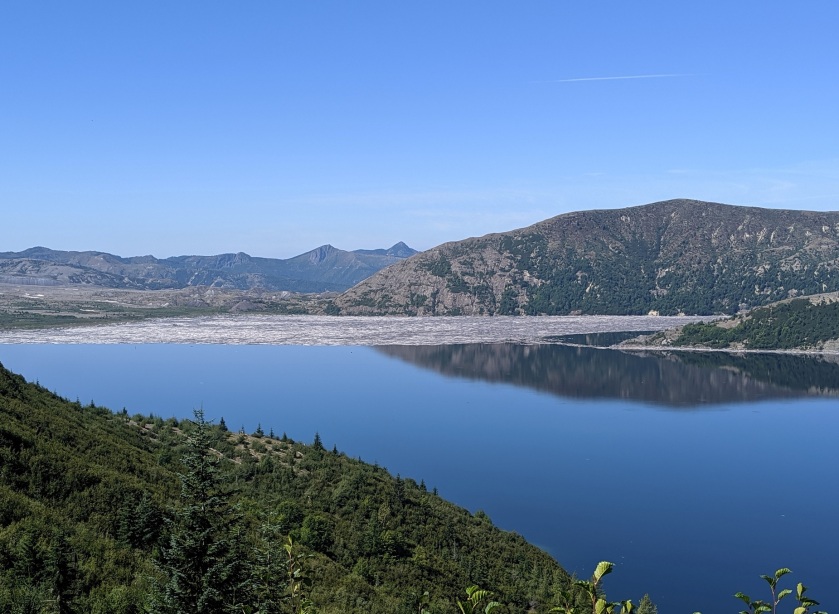 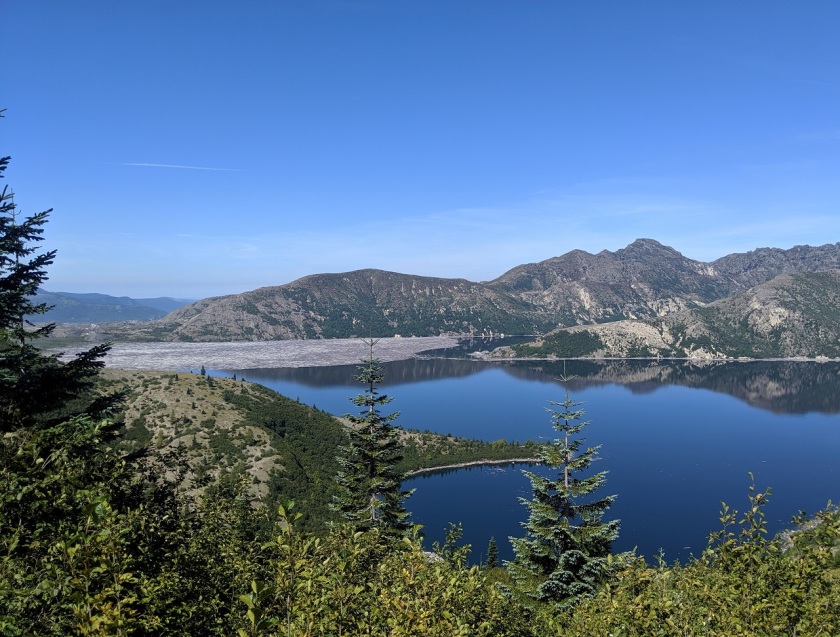 There are two main places to view the mountain and surrounding area.  Johnston Ridge Observatory and Windy Ridge View Point.  As the crow flies, they are probably less than 5 miles apart, but driving are over 4 hours apart.  It is interesting that the area approaching the Observatory are owned by private logging companies and have since been replanted and will soon start to be harvested.  Actually, the logging companies came in and salvaged the downed trees after the eruption.  While the National Monument area has been left to recover naturally.  There is a stark difference in the two areas.   Below is the naturally recovering area with dead trees both standing and laying on the ground. 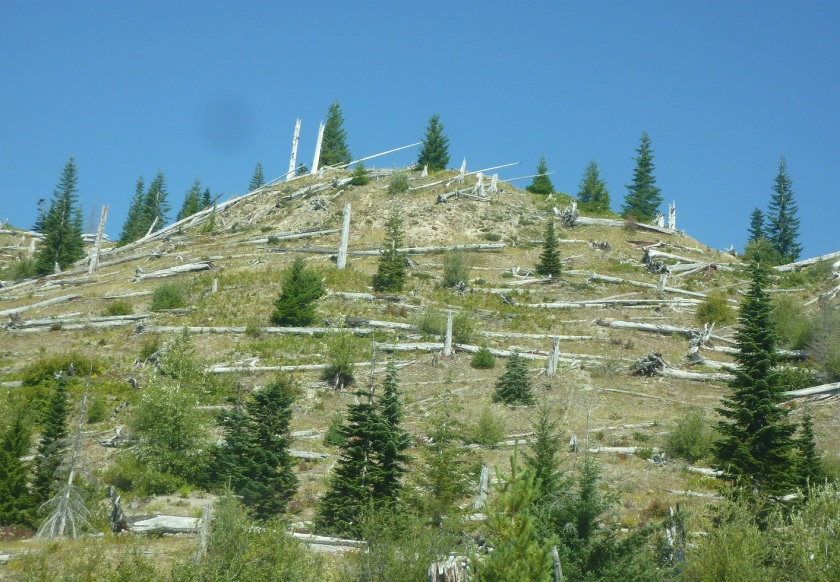 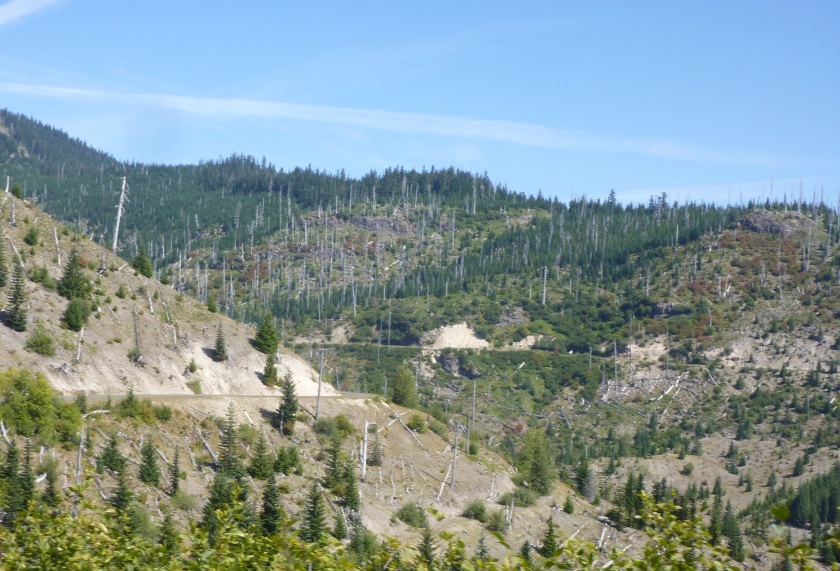 The snow/glacial melt also caused massive flooding in the surrounding area, changing the existing lakes and creating new ones.  With both the old and new lakes the outlets were blocked by ashen debris and there were fears that subsequent rain and snow melt would cause the debris dams to fail and flood downstream.  Below is Coldwater Lake a lake newly formed after this eruption. 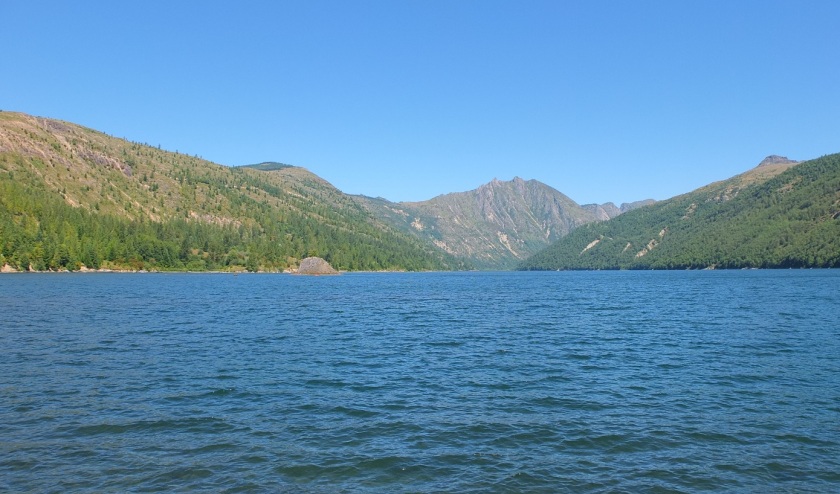 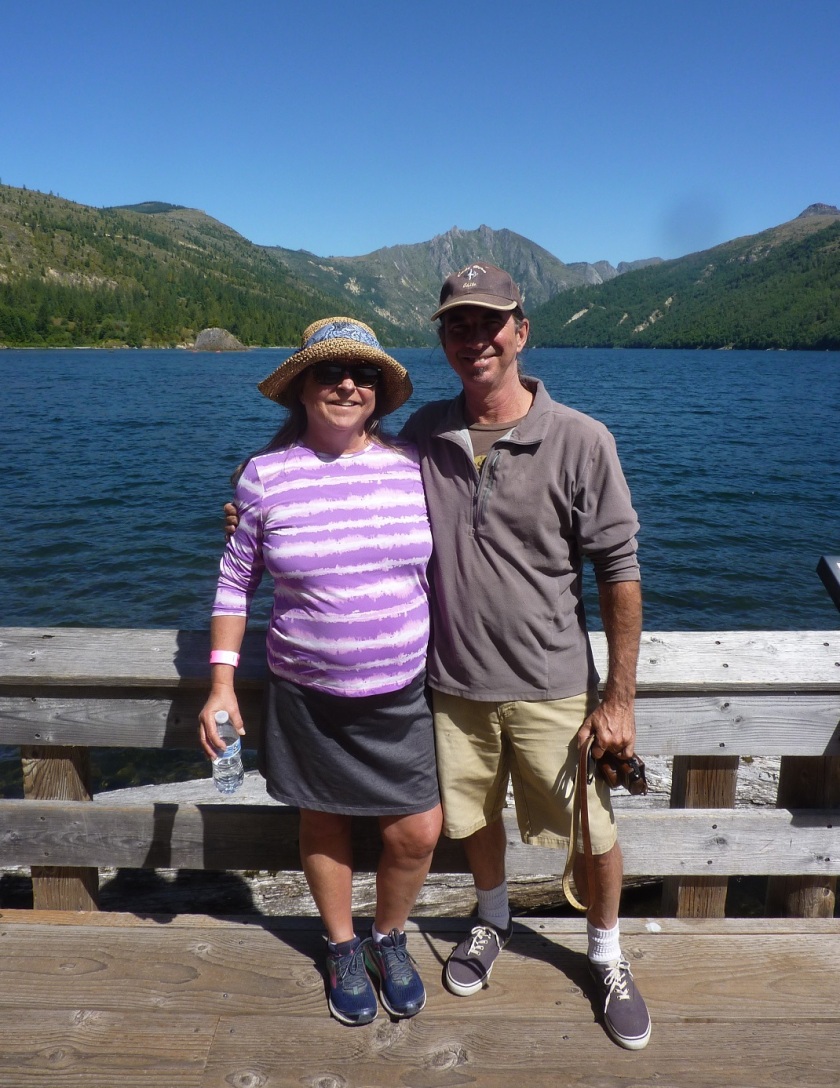 The Toutle river and surrounding valley flooded dramatically during the event and even washed trees as far away and Interstate 5.  The valley was covered up to 150 feet in ash and debris and has been slow to recover as shown below. 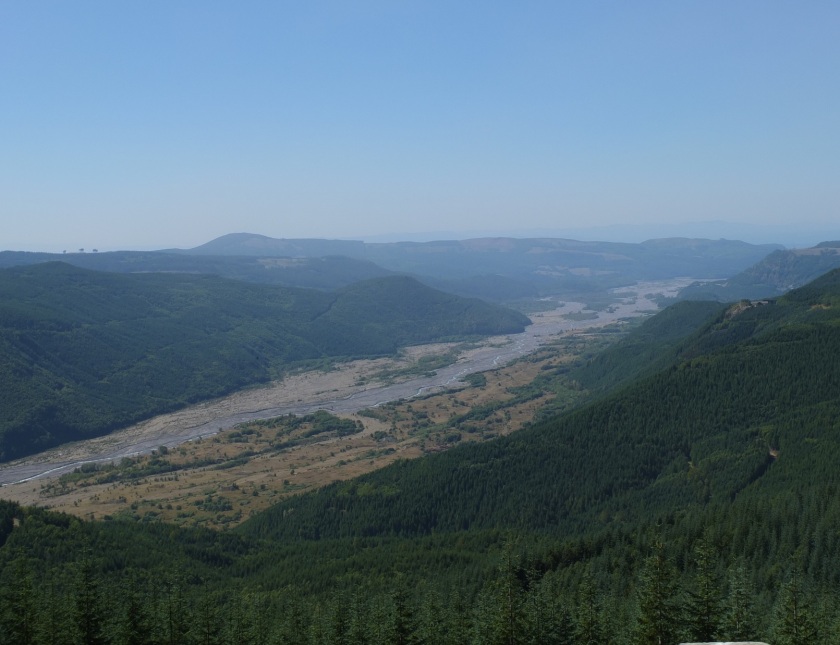 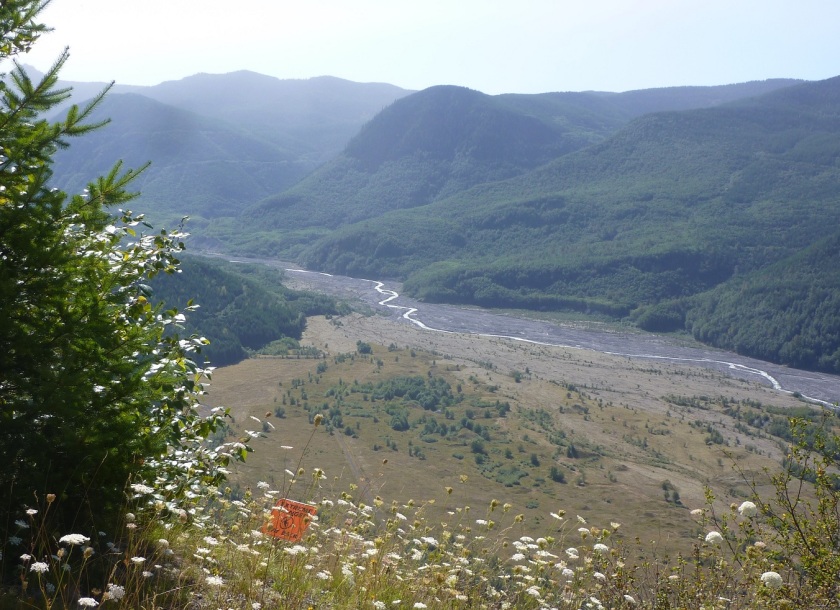 Luckily, they were expecting this eruption or the loss of life would have been much worse.  Much of the immediate area had been closed.  But since the blast shot northward instead of straight up as expected much of the devastation was outside of the closed areas.  As a matter of fact of the 57 people killed by the event only 4 were in the closed areas.  The owners of this car did not survive. 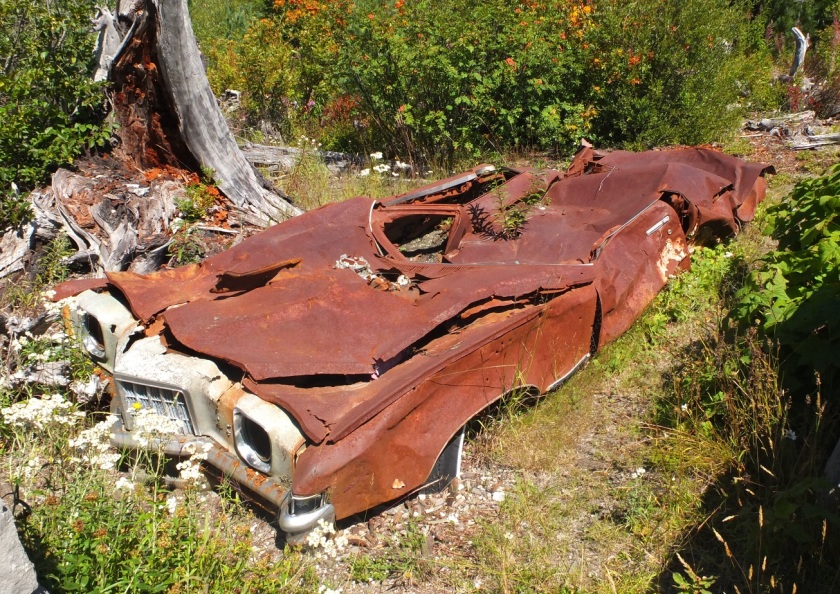 As you can see the creator and surrounding area are still steaming.  There have been multiple smaller eruptions since the main event in 1980 and we are sure that they will continue.  Mt St Helen in one of the youngest and most active of the volcanoes in the Cascades. 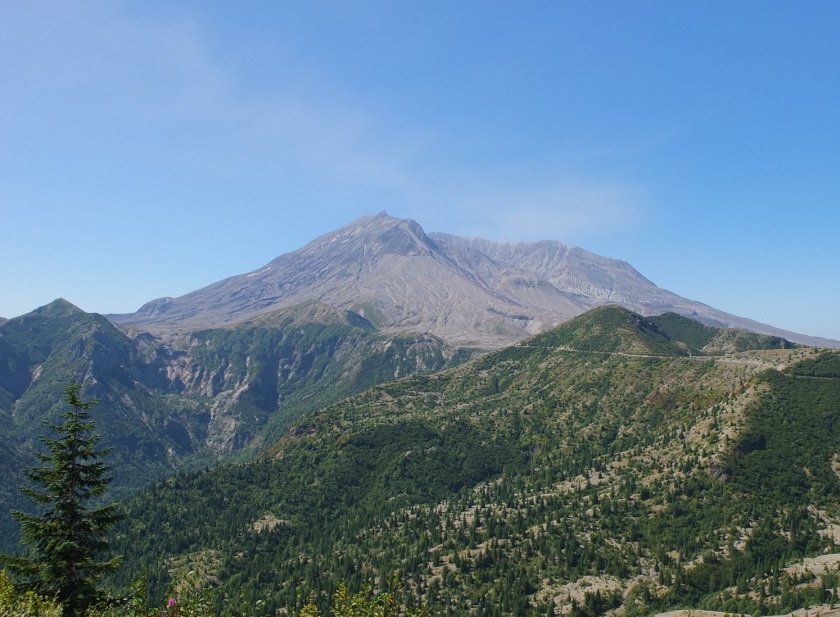 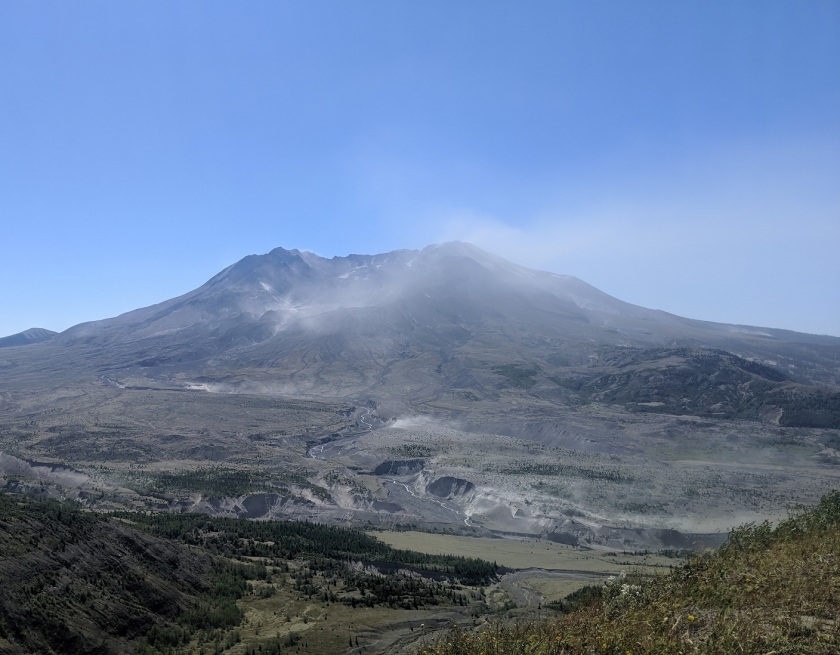 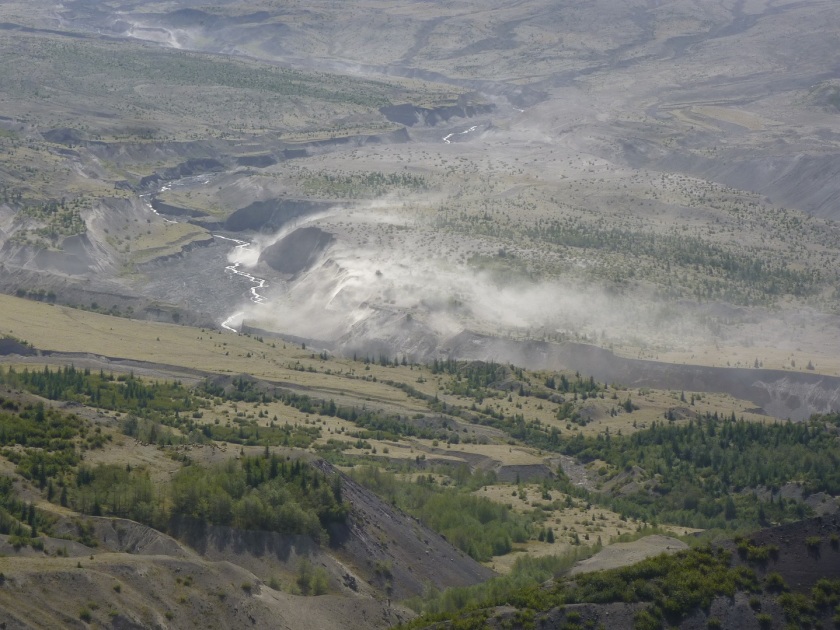 An added bonus to our trip were these great views of Mt. Hood and Mt. Adams in the distance. 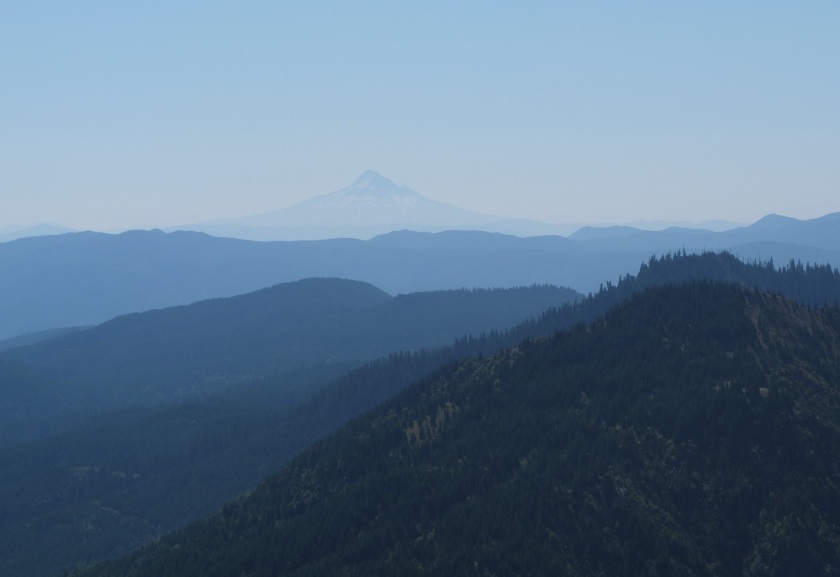 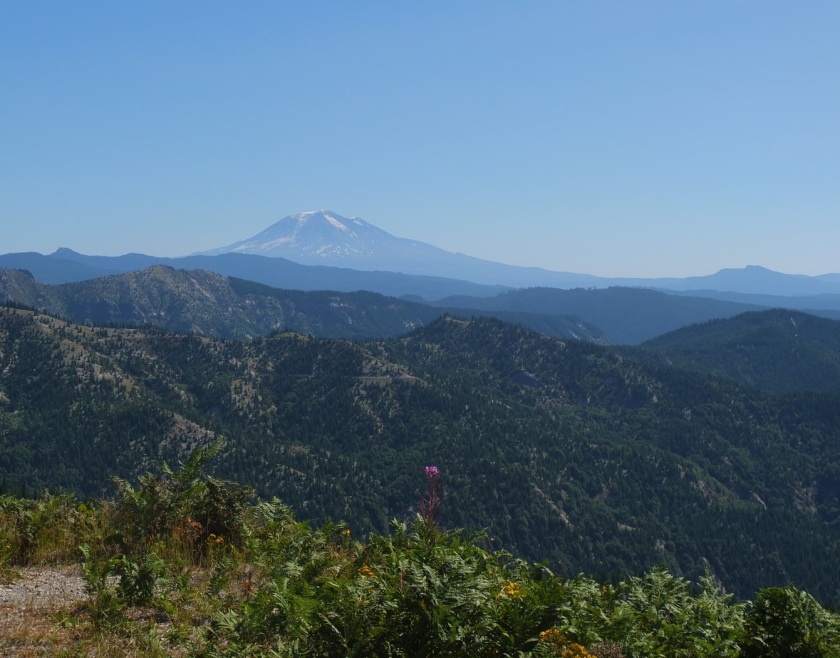